The Anti Bernie Network!
Ms. Reid, Miami-Dade is not all of Florida.
Most Cuban Americans are GOP and don't vote for Dems. The majority of Floridians
don't care about Castro or know who the Sandinistas are.

BRING IT ON MSNBC! 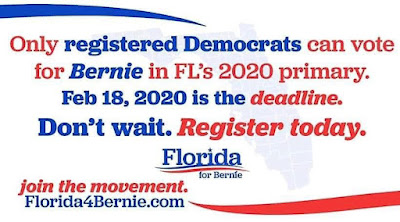 Stay Focused Berners!
Our Revolution Tampa Bay
Posted by Pilar Sanchez-Robbins at 3:30:00 AM

What a crock. Cubans aren't even the majority in Miami-Cade County, and the younger third and fourth generation are significantly switching to Democrat. As the video showed, all the Democratic candidates as well as the entire Party is bring broad-brushed with the Socialist label, so whoever gets the nomination will be accused of it. So worrying about Bernie getting the nomination over Socialism is pointless. Besides, this Country already is Democratic Socialist -- which is how we have police, fire, public works, the military and a host of other government services. Do you really want a volunteer fire department with an untrained yahoo manning the hose?

In her new attack ad she claims Commissioner Pat Kemp is texting lobbyist, May we see  proof of this. She claims she is  ethical ....