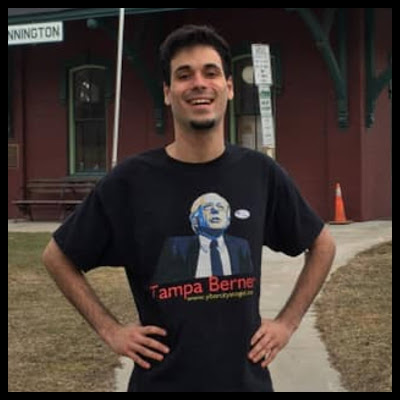 As I watch my former home unravel in political tension and chaos, I shake my head in disappointment. The Hillsborough County School Board is a hotbed for political disaster, terrible candidates, and occasional greatness.

Take the election in District 3 for example. There we have a bonafide progressive, Jessica Vaughn, running to fill the seat against an openly conservative gentleman by the name of Mitch Thrower. It would seem that the obvious choice in this election is Jessica; she supports public education, progressive values, and ending the school to prison pipeline. Mitch, on the other hand, does not support any of these things, and represents the mediocre status quo of the Hillsborough School Board — which, in turn, represents the pungent toxicity of Tampa Bay politics. To continue supporting the diversion of public funds to private interests and accept monies from private prison groups is a bad message.

It is a shame to see former candidates endorse this kind of message. I do not know Ms. Gilmore, though I wish I understood her rationale in supporting more of the same mediocre politics for the School Board. I support Jessica Vaughn and advise you to do the same. Granted, Jessica Vaughn (a friend of mine) has been known to not get along with certain people from the more conservative corners (not necessarily, always “conservative”) of the local Democratic Party. Knowing that, and wanting to elect Democrats (or people who at least support better ideas), why would someone who is a Democrat decide to support the right wing status quo?

I have asked myself this question as it pertains to endorsements. I, for instance, endorsed Sally Harris for the District 7 primaries, even though I no longer vote or live in Tampa Bay. While I personally get along with Sally, and will always respect her decision to oust corrupt former Superintendent Mary Ellen Elia, I am not convinced that I should endorse her again for the general election. She is a Republican, true enough, though she has been engaged with some more than questionable campaign tactics, and was too lenient with a former Superintendent. Lynn Gray has been an ally of public schools, fitness in education, and (my least favorite) has been known to be friendly with the anti-trans Melissa Snively. I am not sure if I should endorse either candidate this go around; based on what would be better for the School Board, I am not certain.

District 1 is an easy one. While I do not know as much about Nadia Combs, I do know that she represents positive change on the School Board more so than Steve Cona, an anti-public school conservative. Why would Democrats support Cona over Combs? Shady business, petty rivalry, some other reason. I am curious to know. I support Nadia Combs and advise you to do the same.

District 5 is a bit tougher. While I like and respect Shake Washington, as well as many of his surrogates, I am more keen to support Tammy Shamburger. While Tammy has a history of not getting along with certain teachers, she also has a remarkable history of getting positive results! Take school lunch as an example, wherein she passed an ordinance to ensure no child would be denied a hot meal due to their financial background. She has championed racial equity in schools, financial discipline, and getting more kids in lower income areas to graduate. She is a true fighter and has done well for the School Board; she, Karen Perez, and (to an extent) Lynn Gray are the only School Board Members who represent positive growth. While I wish Shake well, I do support Tammy Shamburger for re-election and advise you to do the same.

What a mess Tampa politics has become. It has some bright sides, make no mistake. I will post more in the near future, and I apologize for my recent absence on the Stogie. I love this blog and progressive politics, in Tampa as well as my home in Bennington, Vermont. I will have news regarding my political life up here in due time. Until next time...

I agree with everything you're saying. Expect, District 5., Tammy Shamburger is a strait up mean girl that is trying to camp in this seat for as long as she can. She is no friend of teachers. Any one that attacks a teacher for expressing their democratic right of free speech is a tyrant. Especially going after a teacher's job for Just pointing out how incompetent she is. and Please watch one of the many videos of her online verbally attacking people for disagreeing with her. She is a scary bully. It's like her spirit animal is Donald Trump. The Tampa Bay Times, The Black Community, the parents of Hillsborough students, anyone that pays attention to the school board knows, that she's an opportunist trying to use this seat to advance her political career. I beg you to really look into Shamburger and you'll see she is a fraud that doesn't care about our kids but more her political carer. Let's vote her out so she can spend more time loafing with her buddy Dino-Turanchik and photo-opping for political position. Also; Elvis endorsed her. Need I say more Asher.

In her new attack ad she claims Commissioner Pat Kemp is texting lobbyist, May we see  proof of this. She claims she is  ethical ....